Easter Island, Isla de Pascua or in polynesian, Rapa Nui,  in the middle of the Pacific Ocean is one of the most isolated islands on the earth. First-recorded European contact was on Easter Sunday the 5th of April 1722.  The triangular shaped island is about 24,6 km long and 12,3 km wide and is situated almost in the middle between Tahiti and Chile. Nearest inhabited land, the Pitcairn Island, is 2075 km away and nearest continental coast in Chile is 3512 km, so it is definitely not a place on earth you spontaneously decide to visit to celebrate your birthday.

Not exactly spontaneously but still a bit by coincidence,  I was so fortunate to celebrate my birthday on this magical island and that during Easter as a part of my Round the World voyage. Rapa Nui is populated by around 5700 persons and approximately 50.000 tourists visit per year,  so I wonder how many will actually be able to say that they have celebrated their birthday during Easter on Easter Island? 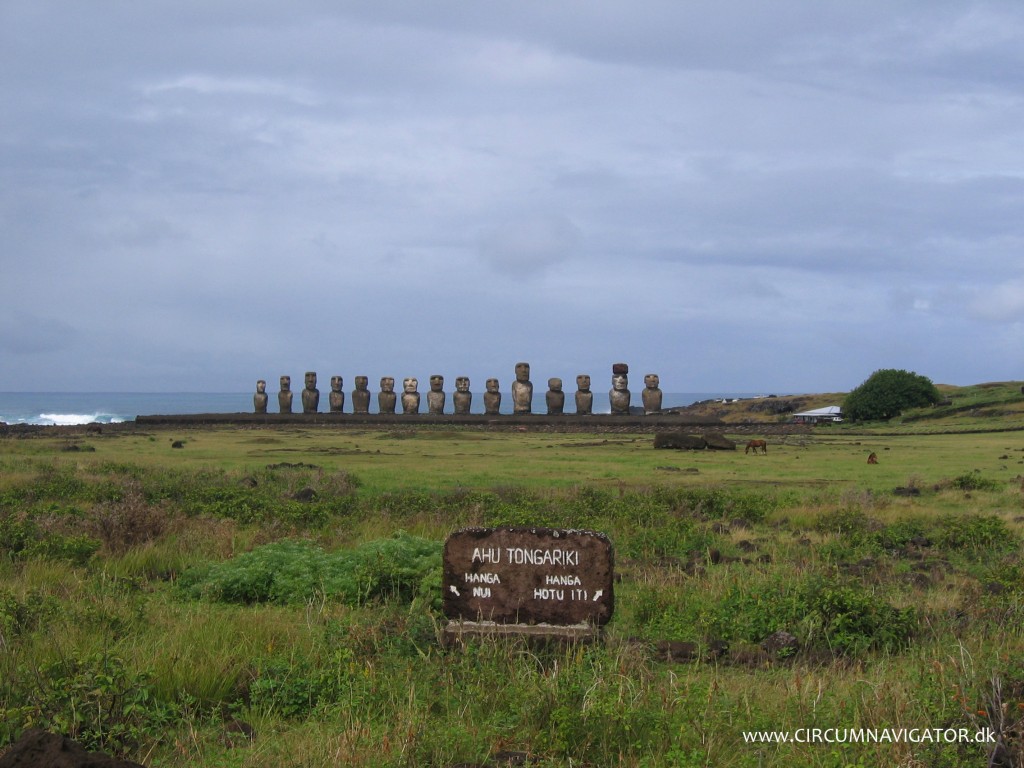 The biggest tourist attraction on Easter Island is of course the human looking stone statues of different sizes, from 2 to over 20 meter high. The Rapa Nui National Park (UNESCO World Heritage Site) is one huge outdoor archaeological site. There are 887 Moai on the island. They are actually gravel stones of ancestors and are situated at sacred burial grounds or platforms, Ahu, often close to the ocean. Most of them were tipped over during a period about 250 years ago when the inhabitants of the island created a disbelief in them as gods. Maybe as a reaction to the environmental degradation caused by massive deforestation, overhunting and harvesting.

It is not the first time that I have visited a microcosmos (see post about the Maya indians) that was almost extinct due to overuse of the natural resources – makes me think, will we ever learn? 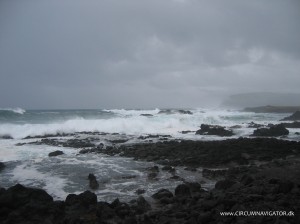 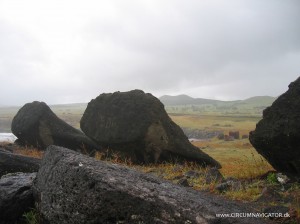 To get around the Island and see the most interesting Moai sites, we went on a 1 day minibus trip with the tour operator Kia Koe. For the subtropical climate, It was an unusual cold, rainy and stormy day, so it was good we didn’t go on horseback. First stop was a couple of burial grounds, Ahu Vaihu and Akahanga, with tilted Moai on the south coast. We also visited an old stone house in the shape of a waka (canoe). It is said that the residents slept kneeling in their houses. 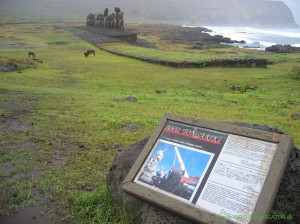 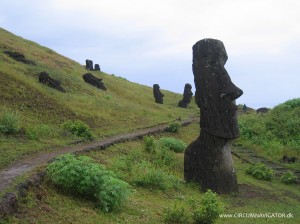 At the far east of the island is the famous Ahu Tongariki. This site was rebuilt and 15 Moai statues resurrected in the early 1990’s. In the 60’s they were destroyed by a tsunami. There are also petroglyps carved in the stones on the ground at Tongariki. At the volcano not far from there, Rano Raraku, it was lunch time and we also saw how the Moai were once carved out here to slide them down hill when needed for at the Ahu’s. The tallest Moai of 21 meters is still lying down on the hillside of Rano Raraku. 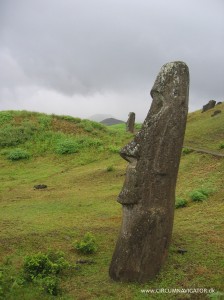 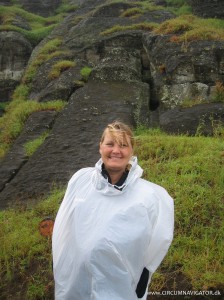 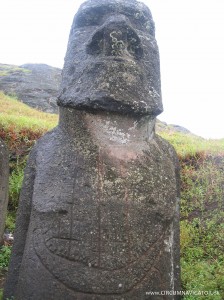 At Ahu Te Pito Kura I touched the navel of the world – a round ferrous stone. Easter Island is also called “Te Pito O Te Henua” which means The Navel of the World. Last stop of the trip was at the white sandy beach at Ahu Anakena with beautiful Moai – many of them with top knots. This is also the site where Thor Heyerdahl with the help from the locals resurrected a statue when he visited in the 1950’s. Some of the Moai here are decorated with “tattoo’s”. One Moai at the volcano has a western looking ship on the breast. 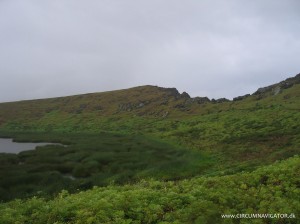 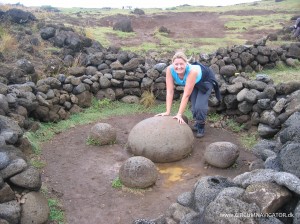 Unfortunately the weather was really bad the entire day, so snorkeling at the Anakena beach was not good. It is said that the water around Rapa Nui is crystal clear due to the absence of sea pollution, and I must admit that I do regret now that I didn’t have the time to go scuba diving in it. 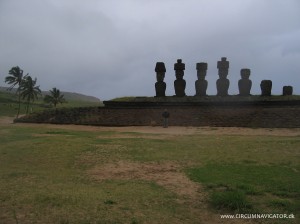 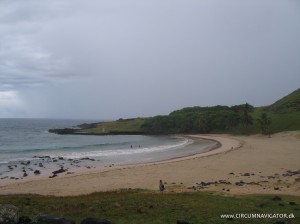 Apart from the Rano Raraku volcano – the “birthplace” of the Moai there is also a big volcano, Rano Kau, just south of the main town of the island, Hanga Roa. The crater  looks like a big pot boiling with something you wouldn’t want to eat. From here is also a view to the landing strip of the airport. It is made longer than normal so it can be used for emergency landing the american space shuttles. 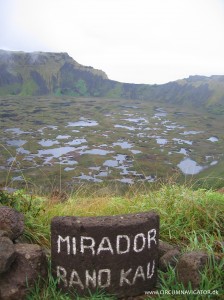 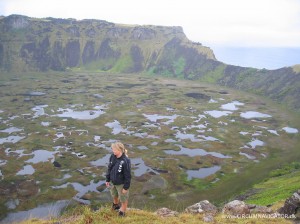 Accommodation and the town Hanga Roa

Our accommodation was booked in advance from a recommendation from Tahiti. So when we landed Señora Erika from Chez Erika was waiting to pick us up. It is a small budget pension with a lovely garden situated in the outskirts of the town only a short walking distance from the center of Hanga Roa. Erika is very friendly and serves perfect breakfast with pancakes, fruit and guava juice. 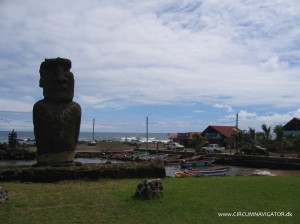 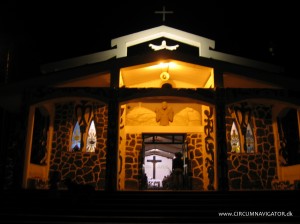 There was not a lot going on in town during Easter. Most of the locals were in church during the evening. We ordered an empanada at Chistoso’s small grill bar and enjoyed the tranquility of the island sitting outside the church listening to the psalms. 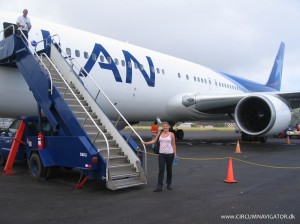 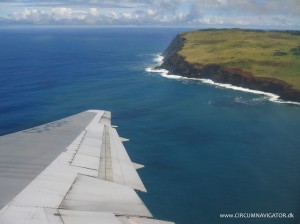 In 2007, I was on Easter Island from the 5th April until the 7th April were I flew to Santiago de Chile and thereby due to the time difference lost a couple of hours of my birthday, but what did it matter to loose a couple of hours when I could put the great experience of visiting such a remote and magical island in my backpack of life. 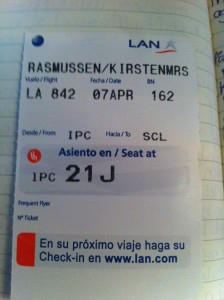